Persistence, Adventures, and Clark the Cicada

Ok – let’s talk cicadas.  I was driving to the church yesterday morning and I glanced into my side view mirror and noticed that I had a ride-along with me.  I was just getting onto I-75 and thought that he would likely get blown off or fly off.  But as I kept looking back, I noted that he was hanging on.  (Side note – a volunteer in the office today suggested we name him Clark).  So, I kept looking back and looking back and Clark just stayed there.  Wings were blowing, body shaking, legs moving around a bit, but he held on.  Clark managed the exit ramp from 75 to the Norwood Lateral and then the ramp onto 71-S and across the bridge into Kentucky.  Finally, I got to the Pavilion Shopping Center where I needed to buy an anniversary card for my wife and as I pulled into my spot, I noted that Clark was still there.  I complimented him for his stick-to-it-ness and headed into the store.  When I came back a few minutes later, Clark had flown off.

So, there were a few lessons in this for me.

One is that there are times in our life where there are a lot of headwinds.  Times where we feel pushed and pulled by all kinds of forces.  Times where we may feel overwhelmed by everything around us.  Times where we feel like we’re just barely holding on.  I kept glancing back at Clark and wondering how he was doing and how he was holding on.  Somehow he was able to do so.  He got me to reflect upon how we have those times in life where we are faced with all those challenges and we wonder, “How am I going to hold on?”  Scripture speaks in many places of endurance and holding on, sometimes in ways like where Paul talks of how he gave thanks for his sufferings.  But there are plenty of other times where we have promises such as those of Jesus in John 17:33

“I have told you these things, so that in me you may have peace. In this world you will have trouble. But take heart! I have overcome the world.””

So, if you are in an experience right now of feeling the headwinds, hang on, trust in the power of God, and hold onto those journeying with you.  Isaiah 40:31 speaks to this as well...

“but those who hope in the LORD will renew their strength. They will soar on wings like eagles; they will run and not grow weary, they will walk and not be faint.”

But there’s another lesson for me in this…what if it was not a situation of solely looking at Clark’s trip as one of trial and difficulty and headwinds but instead an adventure of doing something that he didn’t think he could do and it was a strong and powerful breeze and refreshment that he was feeling as he rode along outside our car at 70mph?  Our journey of faith is an adventure, it is often a journey into unknown directions and paths and trusting that God’s got us and God’s guiding us.  Clark didn’t know where he was going to end up when he hopped on the outside of my van and maybe didn’t exactly know where he was when we got to Newport.  I believe that the call of Jesus on our lives is a call to adventure – just like when Jesus called to his initial followers.  It was a “Come and Follow” without a description of what was ahead.  The great adventure of faith.

So, whether it is holding on through the storms or the excitement of a new adventure…even in these little cicadas we see the truths of God. 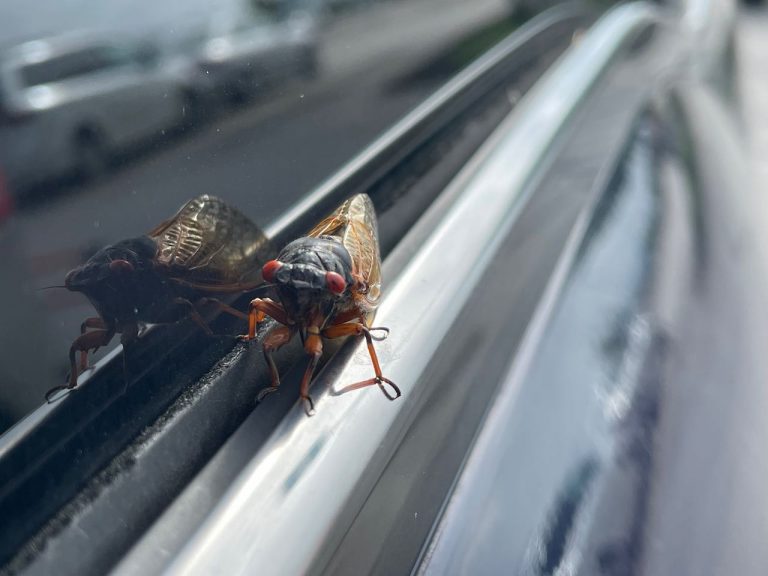