That Bridge – That Day

Do not forget to entertain strangers, for by so doing some have unwittingly entertained angels.

This is a picture of the Allenby Bridge, joining Israel and Jordan.  There’s a lot of history that goes into this bridge, and a fair bit of metaphor as well.  Also known as the King Hussein Bridge, it was named for Sir Edmund Allenby, the British general who commanded the Egyptian Expeditionary Force during World War I.  The first bridge, a simple wooden crossing, opened in 1918; the most recent was built in 2001. The journey from one country to the other is a distance of about 32km if you count the time between exit and entrance terminals, and can take anywhere from 1-4 hours. It’s a complicated crossing, requiring surrendering passports to silent officials on both sides. You can’t walk across, although the bridge itself is pretty short, and taxis are not allowed – there’s only one specific bus for people to cross. That’s n busseot including buses from Amman (the time I did it) and then from the West Bank terminal into Israel, and then into Jerusalem.

Spanning the Jordan River just north of the Dead Sea near Jericho, it was (and remains) central to the open bridges policy instituted by Israel after the Six-Day War (1967), where Israel and Jordan maintained a high level of commercial contact even in the absence of formal peace. Access to the bridge is controlled by Jordan on the East Bank and by the Palestinian Authority on the West Bank, after the Cairo Agreement of 1994. The bridge remains a principal point of contact between Israelis, Palestinians, and Jordanians, and is one of only 5 crossings west and south into Israel.

But this is much more than a simple bridge – even when crossing in a line of never-ending cargo trucks. No, this bridge is much more than that. As a bridge across the Jordan River, it is a bridge across cultures, history, religions, and history, across language and dress, ideology and custom. It’s hard to distinguish important differences between people when you’re all travelers.

It’s also a bridge where people from all those differences meet, and talk, and wait together.  The crossing the day I was there took extra long… we never did find out why; the officials don’t say much. We travelers, maybe 12 of us, sat on the floor of the Jordanian terminal, or on our backpacks. Even in February it was too hot to sit outside. I shared the dates I had bought in Amman with a young Palestinian woman and her 4 children (the dates were beautifully fresh but I’m not much of a date person, and the children were really hungry).  She shared back a fresh apricot (I love apricots).  An Israeli family handed out some bottles of water. A young American man, on his way to work in Israel after having been in Africa and the Middle East, shared candy with the little ones.  A tiny little grandmother, on her way to visit family in Jerusalem, handed out homemade almond cookies (she spoke no English, but when we did get to Israel I took her in my cab to be sure she got to her family’s house – and there followed the most amazing meal I’ve ever had). A Jordanian invited us to his restaurant in Jerusalem (oh my – best rashouf ever) and a rabbi invited us out for drinks on a rooftop bar – paradoxically, on top of the Notre Dame of Jerusalem, a Catholic center (which also happened to be where I was staying; the rooftop bar has an amazing view of the Damascus Gate).  All of us.

That day, the Allenby Bridge became a metaphor for the Kingdom of God.  We took care of one another.  We shared shade and walls to lean on. In a halting cacophony of language, we shared food and a bit of laughter (along with a bit of smiling frustration for anyone who had plans or a schedule that day) and, when we got to the West Bank, shared hugs and addresses and meals and notes to meet. 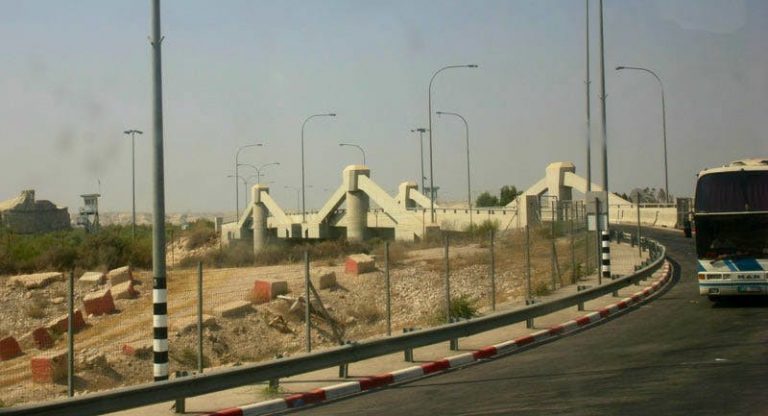