When The Beloved Community Moves to be Upstanders God Creates Bridges of Blessings.

By Shelley Komrska, Member of The Presbyterian Church of Wyoming

On September 22, three members of the Presbyterian Church of Wyoming picked up six Ukrainians who we are now hosting in our church building. Although it’s a new development, God has been at work on this for a while.

My family hosted Nastya, an Ukrainian high school student, in the fall of 2018. Nastya became part of our family during her initial visit. She attended Wyoming High and relished in her first trip to the United States. Serving as hosts was a gift for our family: to interact with someone who was different, and learn about her culture, and see our own through her eyes.

A year later, a delegation was formed to take students to Kharkiv. We needed another chaperone, and PCW’s Bill Morley stepped in to help. This was not a coincidence. Among our group were two high schoolers from PCW. That fall, Wyoming again hosted students and Nastya came back. Two other PCW families also hosted Ukrainian students.

After seeing the American educational experience, Nastya dreamed of attending college here in the states, but she would need a full scholarship. Her dream seemed out of reach. One evening during a pandemic bible study, only two of us entered the zoom on time. We chatted while waiting for the rest of the group, and Nastya and her dream came up. My friend suggested Berea College, which offers a free tuition. Her brother-in-law was a professor there, and offered to set up meetings for her. Not a coincidence. With hope sparked, Nastya applied and made it to the wait list at Berea. The next year, she widened her search, and included Centre College. PCW’s Mike Miller offered to help make connections, and put Nastya in touch with the right people.

This past February, Nastya’s mom Mariia messaged me. She said she could not believe that she was asking me this in the 21st century, but she wondered if Nastya could come to us if war broke out in Ukraine. We said of course, and that she and grandpa were welcome too. Nastya arrived on March 4th, leaving her family and her life behind.

Shortly after she arrived, we were looking for connections and opportunities for her. A PCW member suggested that maybe she could babysit for one of her preschool families. She reached out to the family she thought would be a good fit. Low and behold, the mother, who was expecting her second baby, was from Ukraine. This again, was not a coincidence.

Blessings have abounded since we first welcomed Nastya to our home. One of the biggest ones for me has been to clearly see God at work. Throughout Nastya’s time with us, I have tried to introduce her to God and His love. I have explained to her that most coincidences are not random at all, they are evidence of God’s good plans for us. Over the last 4 years, I have seen countless things fall into place by God’s hand:

Recently, when Nastya’s mom made the tough decision to leave her dad behind and come here, and also asked for another family who needed help, I reached out to PCW’s Mission Committee, and hearts were opened. Pastors Anne and Gray were also immediately on board, and thinking creatively to find a way to make this happen. Our Session has put their support behind this endeavor and took a leap of faith in doing so.

In one month’s time, we transformed four rooms on the top floor of the Presbyterian Church of Wyoming into apartments for our guests: a family of five (mother, father, son 7, and daughters 10 and 6 months), and a single woman. Donations of furniture, baby items, food, clothing, money and time have been abundant. People are offering meals, companionship, doctor visits and rides to English lessons. God is at work, using people and moving hearts. I firmly believe that God put Nastya in our house that first visit. She could have stayed with any of nine other families, but she came to us. It is clear that God has already been at work these last four years – using members of PCW during the journey. I am grateful for our church family, and I am excited that all of us have this opportunity to serve these six Ukrainians with love and compassion, forming a Beloved Community. There will be challenging times, possible misunderstandings and maybe some setbacks. But as James says, “consider it pure joy.” This experience may have bumps in the road, but it is a gift. A gift from God. 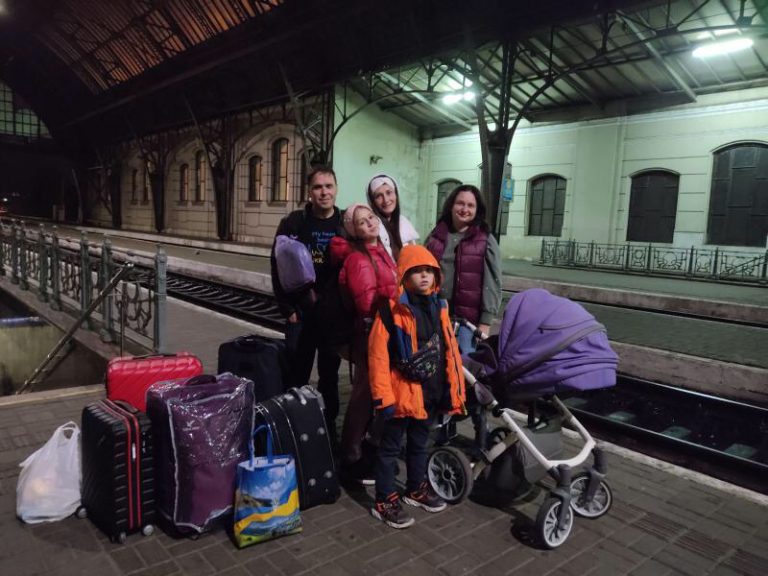